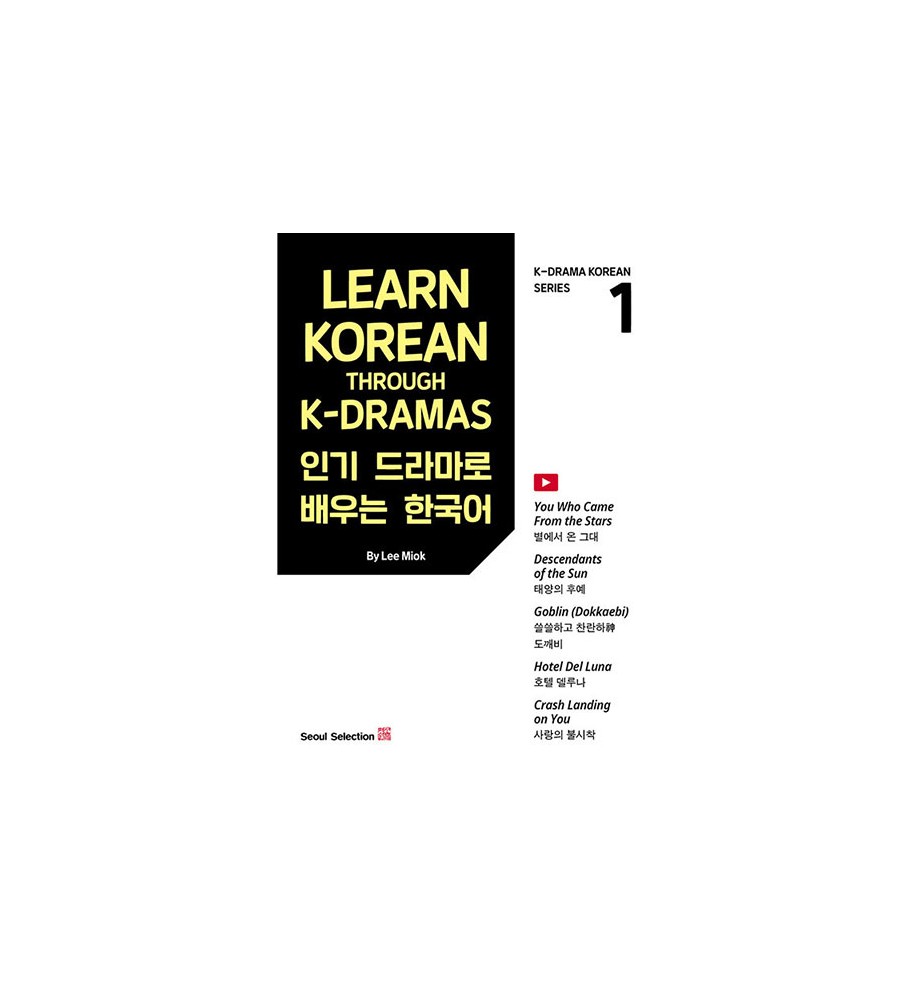 Inside the book: scripts and YouTube links to scenes from five sensational K-drama shows

● Learn Korean through video clips and scripts from five of the latest and hottest K-drama shows.

● Feel the joy of understanding the various expressions used in your favorite shows through detailed exercises and explanations of the vocabulary and sentence structures.

● Encounter Korean food, fashion, and entertainment as well as cultural values through the featured scenes.

Learn Korean through K-Dramas is a Korean language textbook developed around short scenes from five of the most popular Hallyu K-drama shows aired between 2012 and 2019, making the study of the Korean language fun and effective.

In addition to scene scripts, this book comes with QR codes that provide direct links to corresponding YouTube videos, allowing for readers to totally understand the scenes' language content while watching.

This book is also entirely written in both English and Korean to enable even beginner Korean language students to make the most out of its content. The right-side pages of the book are dedicated to the original K-drama scripts and the left-side pages provide English translations for a convenient learning experience for students of all proficiency levels.

The book is optimal for self-study, and its size (150 x 200 mm), relatively small for a textbook, makes it handy and portable.

Moreover, the book's various exercises requiring short, subjective answers as well as the proven-effective dictation practice sections make the book suitable not only for self-study but also as a workbook for use in schools and academies. The cultural commentary in the book helps readers encounter and understand Korea's food, fashion, entertainment, and cultural values in connection to the K-drama scenes.

The five K-drama shows featured in this book-You Who Came From the Stars, Descendants of the Sun, Goblin (Dokkaebi), Hotel Del Luna, and Crash Landing on You-were selected based on their popularity on major streaming platforms such as Netflix.

Seoul Selection will be distributing this book through Amazon.com and Hallyu-oriented bookstores around Europe and Asia, as well as to schools and universities outside of Korea. With this book as the first of its K-Drama Korean series, Seoul Selection plans to publish sequels to Learn Korean through K-Dramas that will include the latest popular K-drama shows.

Though the videos are each only about five minutes long, there is a lot to be learned from their content. Vocabulary and grammar are thoroughly explained with examples from the scripts, and exercise questions to help readers master the various expressions used in the scenes are included in each lesson.

K-drama shows mirror Korean language as it is used every day-colloquial expressions, popular or newly-coined terms and slang used by young people, abbreviations, idioms, and so on-which greatly benefits those who want to learn "real-life" Korean language.

K-Drama Shows Featured in the Book

1. My Love from the Star (starring Jun Ji-hyun and Kim Soo-hyun)

A story about the fateful and quirky romance between Do Min-joon, an extraterrestrial who fell to Earth approximately 400 years ago, and Cheon Song-yi, a popular Hallyu star with an attitude.

2. Descendants of the Sun (starring Song Joong-ki and Song Hye-kyo)

A blockbuster-scale humanitarian melodrama that reflects on the value of life through the stories of young soldiers and doctors who strive to achieve love and peace under extreme conditions in a foreign land.

A mystical and romantic folktale that unfolds as a dokkaebi (goblin), who needs a human bride to end his tedious eternal life, and his peculiar housemate, the jeoseungsaja (Korean grim reaper), meet a girl who evaded a fateful death and claims that she is the dokkaebi's destined bride-to-be.

A story about the extraordinary happenings that take place at Hotel Del Luna, a strange hotel owned by Jang Man-wol, an immortal being as beautiful and aloof as the moon, and managed by Gu Chan-sung, an elite hotelier hired after a fateful event.

5. Crash Landing on You (starring Hyun Bin and Son Ye-jin)

A love story portraying the secret romance between Yoon Se-ri, a South Korean chaebol heiress who crash-lands on North Korean soil after a paragliding accident, and Ri Jeong-hyeok, a captain in the North Korean Special Police Force who falls in love with her while hiding and protecting her.

Chapter 1 You Who Came From the Stars

Chapter 2 Descendants of the Sun

Chapter 5 Crash Landing on You